Bit of culture and nature

Its been a while since I last wrote anything and since then I have left Australia behind and found myself living in Singapore. Also means I have left the dodgy internet limits behind so now I can upload photos without fear of the frenchman cutting my connection for using up our limit. Yipee. Also figured that I am terrible at emailing people so if you are interested in my crazy adventures I'll try and keep this more upto date.

So I have been here for 4 months now, but will travel back to August and my first overseas long weekend from Singapore. 3 Days adventure in Borneo (thanks to Singapores National Day I had the 9th off work). I headed off with Carolyn and I at least was excited by the prospect of getting out into the Jungle, Carolyn was a little more apprehensive of my chosen accommodation, a night in a longhouse and a treehouse. But we started off with a night in a hotel with was not as grand as the name suggested (the Grand Continental), but it did include a big breakfast including curry which set us up nicely for the long drive to Annah Rais Longhouse, a fair way south.

We arrived at the longhouse around midmorning. I had expected the longhouse to be one longhouse on stilts, but infact its lots of houses on stilts joined together via raised platforms. The floor is super bouncy and is made of bamboo which in places seemed like it wouldn't support me, but I didn't fall through so all was good. 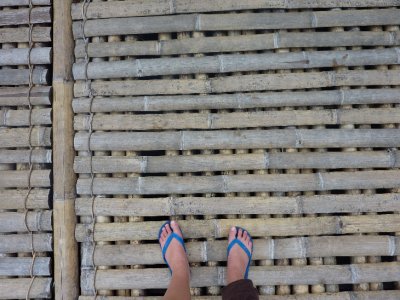 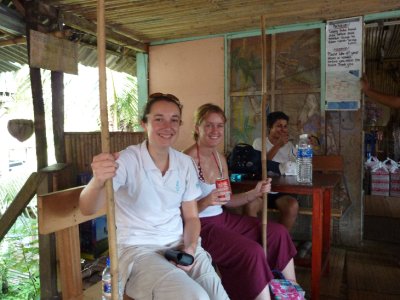 We set off on the long walk into the jungle. I had expected it to be properly jungly with an enclosed canopy and leaf litter everywhere hiding leeches. Since my leech experience in Sydney I decided to hike with proper boots on and long trousers. As it turns out the jungle was very open (downside of this was that we were hiking though the heat of the day and it was really really hot) and very dry so there were no leeches. Despite looking hard I didn't sport any wildlife. I did however see hundereds of pitcher plants amd ferns. 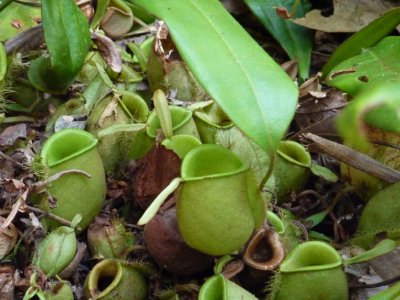 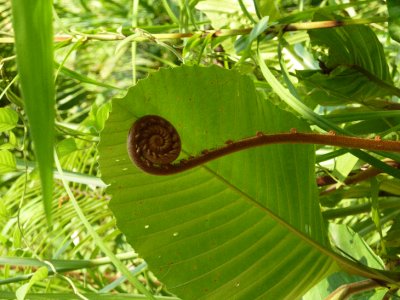 The hike was all uphill and very very hot. 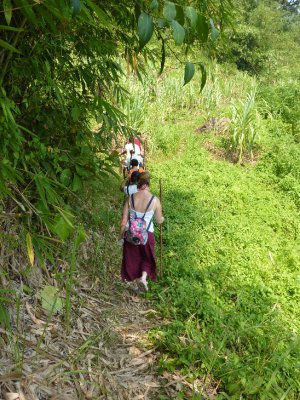 We were joined on the hike by a family from Lewis (uk) who had two kids (11). They didn't complain for the entire hike so if they could do it we could do it and a few house later we were back on tarmac looking at Indonesia in the distance. It doesn't come out well on the photos but it was very smoggy due to the slash and burn farming taking place in Indonesia. The burning bamboo exploded from time to time and sounding very much like gunfire. 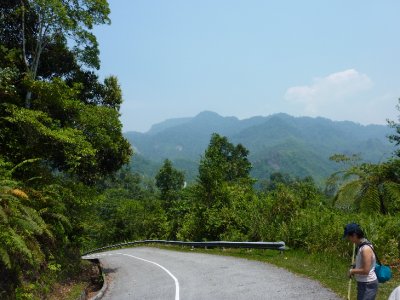 A final push through open scrub land (where wild chillies and garlic were growing) and we arrived at the highlight of the hike, the waterfall. The website describes it as a stunning waterfall, which I am sure it is in the wet season, but we were there in the dry season so there wasn't a lot of water. However we managed to stand under it and it was blissfully cold. While cooling off lunch was prepared, bamboo rice and chicken. Which was described by Tom (11) as the best food he's ever eaten. This earnt him seconds 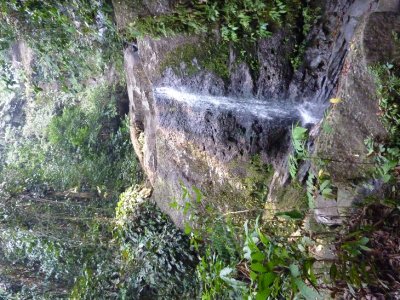 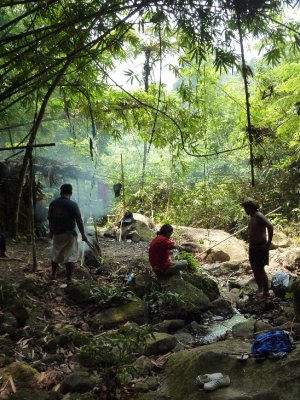 We then had the prospect of hiking back to the longhouse. We were all hot and had pretty much run out of water so decided to get a lift back. But because we hadn't organised this before had we had to wait for the truck to take all the students back first. Two truck loads and 45 minutes later we were still sat on the side of the road admiring one of the locals shoes 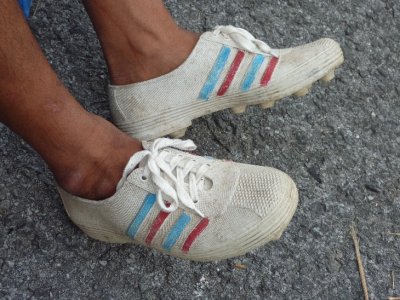 . The kids were restless and so decided hitching was the best bet and flagged down a sand truck. The driver seemed amused and decided to drive us back to the village. And so we climbed up, it was very high and very sandy and we were killing ourselves laughing. We hung on for dear life as the drive seemed oblivious to the fact he had 6 people in the back and no back to the truck. We hurtled up and down hills on our sand truck rollar coaster. Brilliant. 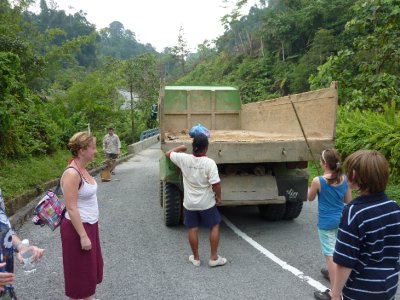 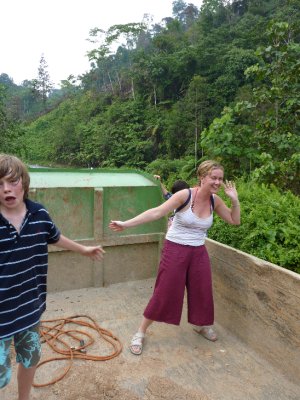 Upon arriving back we were informed however that there was a small water issue, there were a lot of people staying (about 40 students) and so there wasn't really any water for showers. Umm we were sweaty, sandy, muddy and generally hot. So were ushered down to the river for a wash. The muddy river was really stoney and all the Muslim Students were there too, and not that we wanted to strip but it would have been good to swim just in swimming costumes to give our shirts a bit of a wash, but instead took most of the mud back with us. Thankfully our house was a bit away from the main longhouse and we had water so could shower. Carolyn was horrified by the bathroom, a shower over the toilet with a hole in the floor and piles of washing in buckets. But it did the trick and feeling refreshed and clean we headed back to the restaurant for dinner and a show all organised by Mr Edward ( the brains behind the outfit). The show was a little odd, no idea what was going on but the dancers seemed to be having fun. 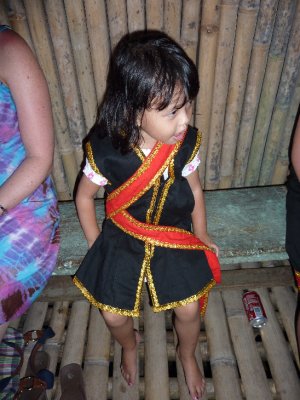 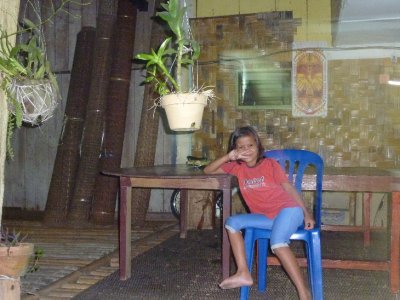 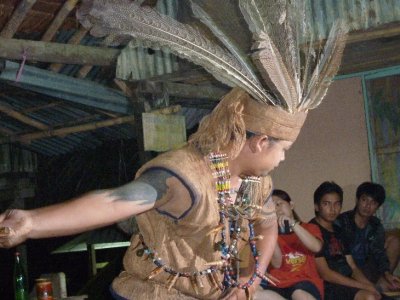 My mosquito repellant top (bought for the jungle last year) is still working and I may not have looked glamerous but I didn't get bitten, Carolyn on the other had suffered my usual fate. I like that top

Anyway our room was basic and hot and my god the family were the loudest snorers on the planet. I don't think I slept a wink. Then about 5am an alarm went off, which was quieter than the snoring so everyone slept through it. Grrrr. Must remember ear plugs next time. 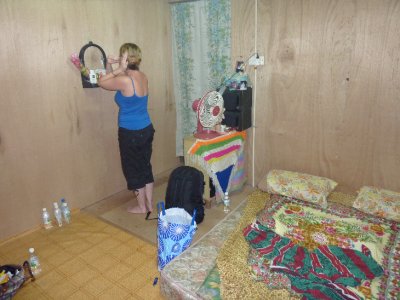 A few house in a minibus sat next to a pile of Durians which caused me to ride with my head out the window and hence catch the sun only on my right side and we arrived at the beach, were excitingly we were to stay in a treehouse. Their website said the rate included the contents of the minibar so we were excited. The treehouse was awesome, it was even airconditioned. But the free stuff amounted to 2 bottles of water a 7-up and beancurd drink. Ummm. Oh well. 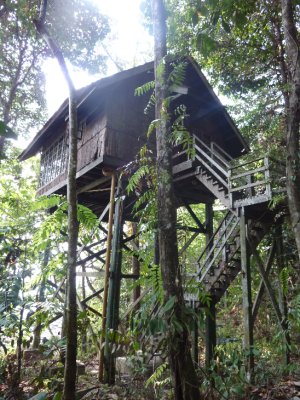 Recovering from a lack of sleep on the beach by sleeping and sitting in the sea. Initially I headed straight to the water to cool down. You could not see deeper than maybe 5cm and it was like very hot bath water. There was no be no break from the heat (I have no idea how hot it was but if felt a lot lot hotter than Singapore). 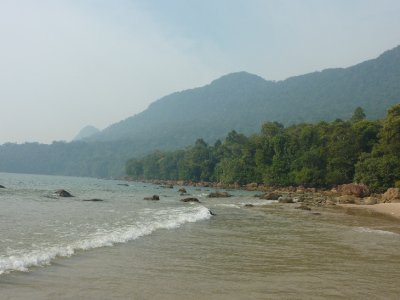 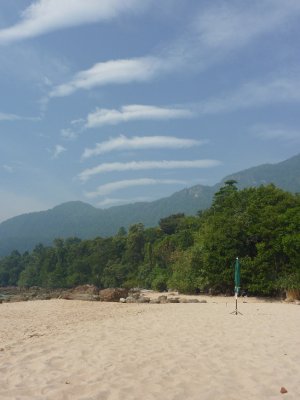 The restaurant ot the resort was good, and when I asked for ice with my drink i got 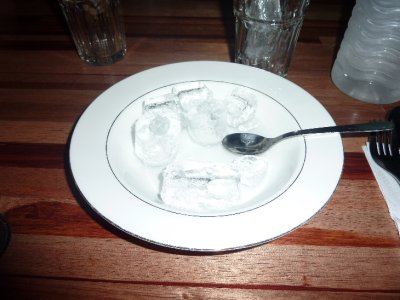 On the final morning we headed to Semingoh Orangutan rehabilitation centre. They are free to roam in the jungle but food is put out for them incase they can't find any. Were were warned that we may not see any as its fruiting season so ample food is available in the jungle. But we were lucky and saw two, one smaller one that stayed in the tree tops and another larger one that stuffed as much food in her mouth beofre swinging around. It was really exciting to see them 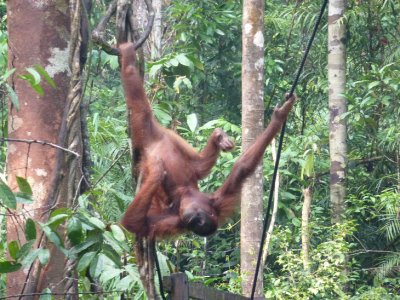 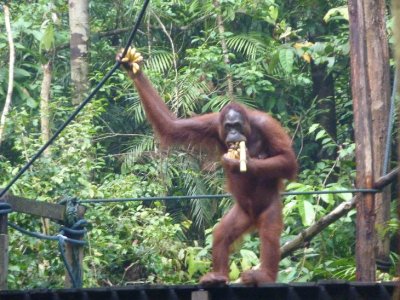 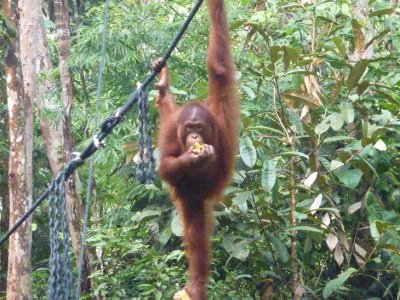 A few more house on the beach and after 3 early starts (6am) we headed back to Singapore. It seems Kuching isn't a popular place to go from Singapore (2 girls on the flight on the way there only ended up there cause the flights were cheap and had no idea what there was to do) but I liked it. There were some mountains near the beach that I aim to go back to climb. Anyway that'll do for now. Learning to Dive next.....

Next Table of contents

This blog requires you to be a logged in member of Travellerspoint to place comments.

If you aren't a member of Travellerspoint yet, you can join for free.